I know it's been a while.  I should apologize, I know.  Who knew training for an Ironman, raising two kids, being a wife, taking on a new (very) part-time job, and writing would be so challenging?

It's still going to be spotty around here for the next 30 days or so.  Your continued grace and support appreciated.

I'm still writing for my church as well as for the local online news publication.  I've written an article today in light of Monday's tragic events in Boston.

Before you read the article, allow me to fill in a little details....

Papa Bear has qualified for and run the Boston Marathon 3 times.  In 2003, I was just past my first trimester with Brother Bear.  My parent-bears joined us as spectators and shared in the joy of watching Papa Bear run the "race of a lifetime" (missing the birth of their 2nd grandbear).  There was an awful heat wave that year, but Papa Bear did great.   In 2007, Papa Bear ran again.  This time, my in-law bears and Brother Bear (now 3 years old) joined us.  They almost cancelled the race due to rain and floods.  Papa Bear ran his heart out for his family.  Papa Bear qualified again and we headed back in 2010.  This time, we had a diaper clad Sugar Bear, Brother Bear, and Papa Bear's sister.  He ran a Personal Best for the course.  We joked that the "3rd time was the charm".  It was a delightful, joy-filled day.

We only see the race in 2 spots.  We ride the train out to mile 16-17, watch the elite runners, and then wait for Papa Bear.  Once he arrives, we give hugs, kisses and high fives then we quickly hop back on the train and do our best to get as close to the finish as possible.

In 2010, we decided to stop a little short of where we normally go because the crowds were hard to navigate with a stroller.  We found a spot and packed ourselves in with the crowds, ten people deep.  Despite the noise, Sugar Bear was asleep in the stroller.  Brother Bear was on his Aunt-Bear's shoulders so he could see.  I was trying to get some pictures of the racers coming up the street.  I would jump up in the air and snap a picture in hopes that I might get a shot of Papa Bear or the massive crowd of runners.  This is what I caught instead: 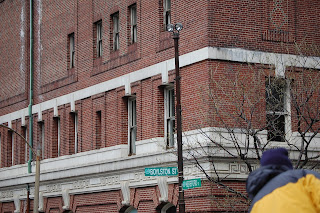 This spot is 2 blocks from the second blast that occurred on Monday.

I tried, and failed, in October to qualify for this 2013 race.

This could have been my family.

To say this has affected me deeply is an understatement.

It's not that there's a sense of gratitude that I'm alive - a "but by the grace of God go I" thing.   Instead, it is a personal feeling of having been in that crowd before.  Having celebrated the moment with these people on multiple occasions.  I feel like I know these people.

That's the backstory.  Feel free to read the rest of my thoughts here.

Lord, have mercy on this world.

What should Mama Bear name the "new" bike? 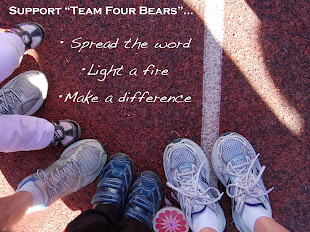 Mama Bear
I'm a mom of two young cubs: Brother Bear and Sugar Bear. Brother Bear is my first born. He's a strong-willed grandpa in a kid's body who never ceases to amaze me and/or drive me crazy. Sugar Bear is my sweet baby girl. She is all smiles, dimples and charm and knows just how to work me. I'm a better person because of the 2 of them, and could spend hours swept away in their "blue-tiful" eyes. I'm married to Papa Bear, who - without a doubt - is the perfect mate for me. He's the yin to my yang, the calm to my crazy, the peanut butter to my jelly. I love to laugh, and can find humor in almost anything (which often leads to trouble). I spend my free time reading books of all sorts and stalking, er, following other blogs. I'm passionate, opinionated and headstrong and love good dialogue.